Color Me Rad? You Betcha. 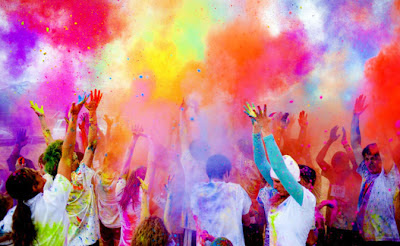 This blog has really taken a turn to dealing with 'body image' issues, hasn't it? Oddly, I don't really think I'm that concerned with it all. Maybe I'm lying to myself right there, maybe I'm not.

Either way - let's talk about it some more, shall we?

So, if you've known me for very long, you'll know that I am a complete and total sucker for crowds, events, parties, concerts, and any public forum where people are all gathered together for a common interest or excitement. In my younger years I thought it was because I lived and breathed for parties. As I've gotten older (not old, mind you) I've realized it's because I get a serious rush from things that bring together communities.

Hang around outside of IKEA for hours the day of the grand opening? Perfect, I'll be there. Sleep out in a tent on a busy road for a good parade spot? Absolutely. Stand in sub-freezing temperatures for 9 hours without food, water, or a bathroom just to claim the experience of New Year's Eve in Times Square? Been there, never regretted a second.

After my oldest daughter was born, I started running. I'd never really run before, but I lived next to a superhero of a woman who came from a family of runners. Somehow she inadvertently inspired me to start jogging as a leisure activity and I actually grew to really like it. Don't get me wrong here - I was never very good at it. I never ever ever could run faster than a 10 minute mile, and even that wasn't all that common. Nevertheless, I liked it just the same.

One day this superhero friend mentioned an upcoming 5K that was happening as part of our little town's yearly celebration: Art City Days. She mentioned the run was low key and more importantly that there were TONS of prizes they raffled off after the race was over. VERY reluctantly I registered, felt intimidated at the very thought of participating in a race, but couldn't pass up the prizes!

I made a glorious discovery the day of that race. Guess who runs in these races? Everyone. All types of people, all walks of life. We're not talking 10K or 1/2 marathon here - we're talking a 5K - that's just barely over 3 miles. There were kids, pregnant women, grandparents, and everyone in between.

The morning of the race, I jogged up to the local high school (which was just up the road from my house) and I felt a very distinct sense of community. I was hooked.

I ran that race - I did pretty terribly, really, but I LOVED it. There was such a rush that the 3 miles didn't even seem that difficult and people were so excited that it was easy to forget that there were plenty of people more than twice my age that were regularly passing me by.

Skip ahead a few years and he were are. I've done a few races since then, but nothing for a few years. As previously mentioned in some older blog posts, I'm not in the same shape I was 5 years ago. Who is, really? (If you are, keep it to yourself) Last fall I decided I'd start working out again - and working toward another 5K. I've watched the announcements of races come and go and just hadn't FELT it. Nothing inspired me. Nothing.... until..... this:


I mean.... COME.... ON. Could there really be anything cooler than THIS?! I dare say NO! I registered for the Color Me Rad 5K within about 15 minutes of learning that there was going to be one here in Orem where I live. I also noticed one in Virginia Beach (my homeland) just a week after the one by me! My friends here AND there can bask in the glory of this race/party.

After registration, I landed on a committee for a local Blogger Retreat called Breathing Space. I was thrilled to learn that Color Me Rad (@ColorMeRad5K on Twitter) was one of the sponsors. I was even more thrilled to learn that I was going to have the opportunity to GIVE AWAY TWO FULL REGISTRATIONS to any Color Me Rad 5K being hosted anywhere this year throughout the country. Stop thinking about this - just enter. You know as well as I know that you're dying to be there.

(One winner will be selected at random via random.org and will be awarded both registrations, one for themselves and one for a friend)

So- here it goes. Follow the directions below to enter! Good luck - and happy running.

a Rafflecopter giveaway
Posted by Unknown at 8:57 PM