A few weeks ago I was stuck right in the middle of a typical day. I had skipped breakfast, most of a well-balanced lunch, and was racing around balancing my kids, home responsibilities, and work meetings.

If you're anything like me, 98% of each day has to be perfectly timed in order to actually execute properly. From the minute I wake up, until the minute I crash into bed, I'm running. It's really unfortunate that all this "running" doesn't seem to impact my jeans size.

A couple Thursdays ago, I had an hour long meeting I was obligated to attend in a location about 30 minutes from my home. Doing the math, I realized that I'd likely only be gone from home for about 2 and a half hours and arranged for my mom to be with my kids a portion of that time, and my 12 year old to be home with my kids the remaining. Again - timed to perfection.

I rushed from home, dressed in business attire (brand new cream colored lace shirt - this is important later) and was slightly uneasy about the portion of time my kids would be without adult supervision. I rushed into the meeting, watching the clock, and forgot to grab a snack or a drink before settling in.

Slightly more than an hour passed and the meeting adjourned. Again, I skipped the opportunity to eat anything and hopped back on the freeway as fast as I could. I whipped around the point of the mountain, the geographical split between Salt Lake and Utah Counties, and headed for home.

I rounded the big bend on the highway and while chatting with my mom on the phone heard the dreaded "WHOMP, WHOMP, WHOMP...." 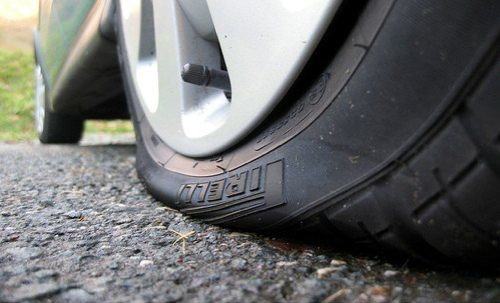 At this point, I hang up the phone and pull over to the far side of the freeway. I'm just at the bottom of a gradual hill with no exits and a small shoulder of safety keeping me from the 70 mile per hour traffic rounding the mountain. I hop out of the car at my first opportunity and evaluate my situation.

My tire's not just flat - it's shredded... and I quickly become aware that it's about 100 degrees on that busy black top.

Now, if you know me, I consider myself a fairly handy person and while I was working on restoring an old VW Bug in college, it's been years since I've worked on a car. It's been even longer since I've dealt with a flat tire.

I grab my phone and call the spouse. His response..... "Crap! I meant to tell you not to drive that car anywhere until those tires were changed..." He follows up with a promise to hop on his motorcycle to be there as soon as he can. He follows THAT with, "go ahead and get started...."

At this point, my heart sunk a little. I was torn between being handy and being a damsel in distress. I was in heels, black trousers and a {brand new} CREAM lace shirt, not to mention it as 10000 friggin' degrees and I was in the midst of traffic that didn't and couldn't slow down on a very precarious spot on the highway. As silly as it sounds, I was flooded with emotions. I was uninterested in getting dirty, embarrassed at how inept I was feeling, totally freaked out by the traffic AND I was melting and STARVING.

I couldn't help but think of my dad. My dad - a superhero kind of a guy that stopped regularly to help motorists. Though not his profession, he was a skilled mechanic and could fix anything - not to mention, he was always seeking opportunities for service. All of a sudden, I'm almost (very) teary eyed. My dad wasn't available to come help me - he was busy - in heaven, and this was the first car problem I'd had since he'd gone there.

This all sounds pretty melodramatic now, but at the time, it was very real.

My kids were home alone, far longer at that point than they should have been. My mom left her house to head for mine again, as I was unsure of how long I was going to be stranded and I knew my husband couldn't get to me as fast as I needed him to.

I popped the trunk and peeled out the jack and spare tire - this in and of itself I felt like I deserved an award for. (It was like a puzzle with snazzy little bolts and screws) I resolved myself to make my dad proud and to get this tire changed myself.

I jacked up the car even though it took me about 15 minutes to realize the arm could be bent to a certain angle for much quicker lifting results. I began loosening the lug nuts on the wheel and was struggling to push enough weight against them to get them to give.

From behind me I heard some grass rustling (I was sitting at the top of a peak that dipped down into a freeway exit ramp and a Park-N-Ride lot situated in the distance) and heard a deep voice, "Can I give you a hand with that?" Again, conflicted, I tried not to scream out in thanks, but wanted to appear that I had things mildly under control. Obviously, I obliged.

This man, Mr. Kelly McDonald, as I later came to learn, had come to save the day. A middle aged man with an orange construction company shirt, heavy work pants, and cracked hands, had been heading the opposite direction on the interstate and had spotted me. In order for him to have seen me, he would have had to of seen me across 8 lanes of traffic. In order for him to have gotten to me, he had to travel about a mile and a half to the next exit (around the mountain), exit, backtrack heading the opposite direction, exit well before me, park at the Park-N-Ride lot, run through heavy traffic on the off-ramp, and climb a substantial incline.

After offering his assistance he apologized for taking so long to reach me. Humbled, I started to realize how concerted his efforts would have had to have been to get to me. I explained he need not apologize, because I hadn't even known he was coming.

Within a matter of seconds, he's popped all the lug nuts off and has switched the tires. Additionally, he gently recognizes the efforts I had made so far and tries to reassure me that I'd been doing a great job without him. At this point I can't help but bring up my dad, "You know, my dad passed away a couple years ago. I was trying to make him proud by fixing this myself." He responds, "Well, my dad passed away too. He was a mechanic. I'm making HIM proud right now by stopping to help you."

Again, the tears. Good thing I was wearing sunglasses.

He finishes up. I ask him his name and thank him as genuinely as I can. We shake hands and he's back down the embankment and off to the Park-N-Ride lot.

Within about 2 minutes, the husband pulls behind me up on his motorcycle. I try to maintain my composure while I tell him about the man that had just helped me. We realize we need to make our way down the interstate shoulder to the next exit, over a mile away, so we can put a bit of air in the spare tire.

On the trek home I reflected on the goodness that still exists in this world. As cliche as that sounds, it's real. Mr. McDonald was obviously a hard-working man, it showed in his hands. Had I seen him anywhere else, I would have likely just seen a man a little rough around the edges. I'm thankful for the opportunity to have seen this truer side of him.

I'd also like to think that his dad and my dad were high-fiving in heaven.