If you've known me more than eight and a half seconds, you likely know that one of my main motivations and driving forces is FUN. Perhaps that couldn't sound more cliche, but it's true. So, sue me.

A few weeks ago, I was tonking around on Twitter in the early morning hours before sunrise and somehow caught a glimpse of a Twitter account I hadn't seen previously - @ProvoTreasure.

Well, because I live a hop, skip, and a jump from Provo (almost literally) and because I like treasure, I decided to take a peek at what was going on.

At that point, @ProvoTreasure only had a handful of followers, but I was intrigued. I read over the Twitter bio and found this little blurb:

Obviously, within one skim of the status, I was confident I was going to find the treasure.


Starting Sept. 28, after the BYU v. Hawaii game, will be tweeting clues to
find the $5k treasure hidden in Provo/Orem.
http://www.ProvoTreasureHunt.com

Excitedly, I sent the web link (which at that point included just a general overview) to my husband, who's profession involves Global Information Systems technology (high-tech mapping) for Orem City. If there's treasure in Orem, he'll find it. He knows this place inside and out and upside and down. His first response? "That's not real."

Well color me naive. I was certain it was real. I followed @ProvoTreasure instantly and tweeted this:

Within a few minutes, I get this in response. 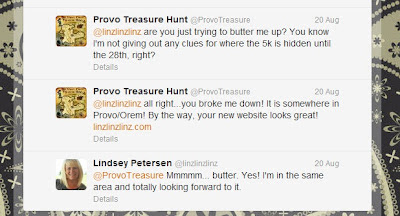 Within a few more minutes I look "Provo Treasure" up on Facebook and find a page for it there too. I send a friend request - and I'm in (the FIRST friend, too). 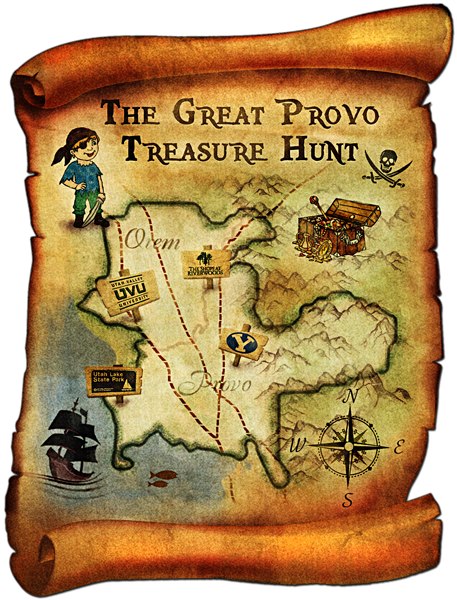 Are you near me? Think you can beat me to it? Prove it.

Want more info?
Find them on Twitter here: @ProvoTreasure
Find them on Facebook here: Provo Treasure Hunt
and if you want all of the skinny, watch this video.

I like people that think outside of the box. Well done, Provo Treasure, well done.